American Horror Story: Hotel is the fifth season of an American horror series. The plot centers on a seedy LA hotel owned by The Countess (played by Lady Gaga, who won a Golden Globe Award for the performance). Its creators noted that it is thematically darker than previous seasons, and one would have to agree if he or she considers graphic rape to be thematically dark.

In the season opener, a male heroin junkie is brutally and graphically raped by a faceless male monster called the “Addiction Demon.”

This photo may be triggering to survivors of sexual violence. 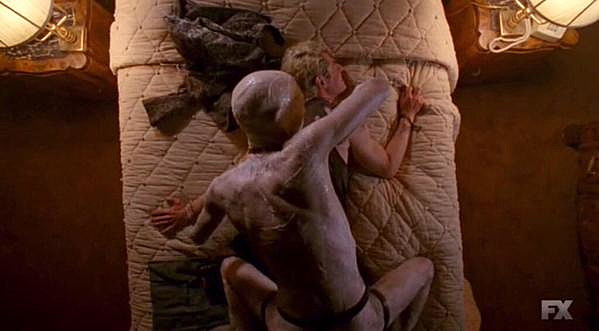 The scene is supposedly a metaphor for drug abuse and addiction, but many people thought the scene went too far, noting on Twitter that rape is not entertainment and is not an appropriate vehicle for shock value.

Film critic Richard Lawson of Vanity Fair poured fuel on the fire when he tweeted that, “It’s fun to cast a comedy actor in a brutal gay rape scene because gay rape is funny.” The tweet has since been deleted, but Lawson went on to pen the article, “American Horror Story: Hotel Isn’t Trash – It’s Garbage” and defended his initial statement that the scene was intended as a joke played out for camp value. He summarized by calling the scene dreadful, but faced social media backlash at the privilege displayed in his ability to see humor in such a scene.

Whether you take issue with Lawson’s interpretation of a rape scene as funny, or with rape being used as a graphic metaphor, clearly this is not OK. This is normalized sexual violence. It contributes to the culture that perpetuates this kind of behavior and it needs to stop.

We need to change what’s normal.

Next Project (n) Campus Misogyny: Mom Would Be Proud