The Big Bang Theory is an American sitcom that began in 2007 and is currently in its eleventh season. It follows a group of stereotypically smart, nerdy, socially awkward men and their stereotypically less intelligent, beautiful, blonde female neighbor. Most people who identify with either set of characters would say it’s quite funny.

It’s also quite disturbing in the regularity that it objectifies women and normalizes harassment and assault. Let’s go with one obvious example that helped set the tone.

In Season 1, Episode 9 (“The Cooper-Hofstadter Polarization,” aired March 17, 2008), Sheldon, Leonard, Howard, and Raj are testing out remote controls for various devices – lamps, remote control cars, and the like. Penny stops by to say that they are being too loud. As the scene unfolds, the remote controlled red Corvette (equipped with a roof-mounted camera) approaches the skirt-wearing Penny and drives between her legs. The action continues as follows: 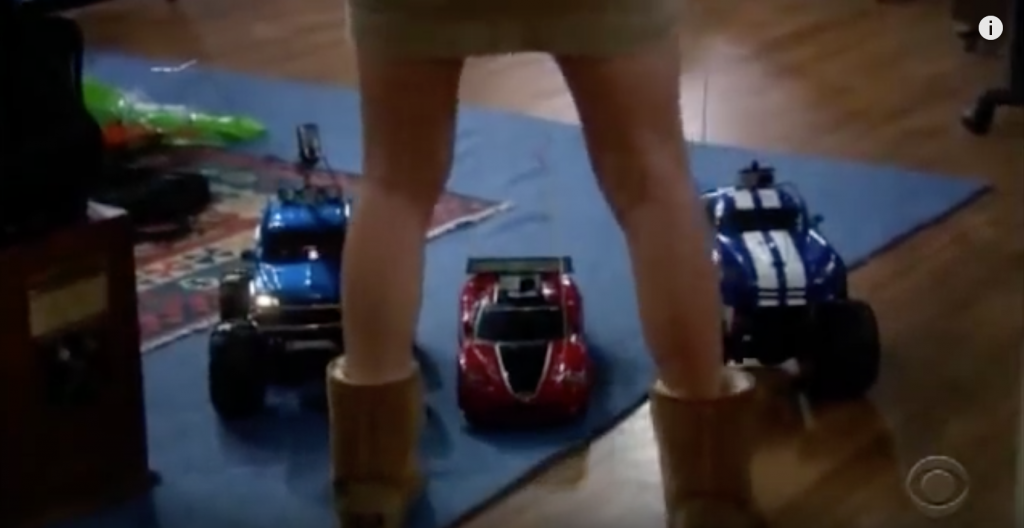 Sheldon: “You may want to put on slacks.”

Howard: “That would be me.”

What’s wrong with using a camera to look up a woman’s skirt (or at any person’s private parts, for that matter?) Aside from the fact that it’s an invasion of privacy, it is illegal in many states. (Yes, there are still states where it can be argued to be legal). Virginia, Massachusetts, and Texas are three states that make upskirting explicitly illegal – indicating that this topic crosses the red/blue border.

Voyeurism has become quite trendy in American culture, and upskirting is a legally controversial example of voyeurism. While most states have laws that protect people from non-consensual filming and photography, upskirting often happens in a public place – and many voyeurism-related laws were written specifically to protect people in private places like their homes and in bathrooms and locker rooms.

In the case of the Big Bang Theory’s upskirting adventure, Penny may have had a strong legal case. Her private parts were filmed in a private location without her consent, and any mistaken notion of consent was surely clarified when she said, “No! Stop it! Leave me alone!” Still, Howard pursues Penny with the camera after she denies consent. It’s ugly all around and definitely not OK.

Yet, the audience roared with laughter, both in the studio and at home – and that is how we know that violating a person’s right to privacy this way has been normalized.

It is time to change what’s normal.